This year’s Seattle Wine & Food Experience (@SeattleWineFood) has come and gone, but not without some great eats, great treats, and amazing beer, wine & spirits. Jamie Peha @TableTalkPeha and her team did an amazing job with the event this year, adding new elements in some areas, and changing things up in others. The room flowed well, the wine flowed well, and the restaurants kept the delicious bites coming. I will say right off the bat that the live music was probably the best I’ve heard at any tasting event. The guy just made you want to do a little dance along to the music every time you walked by. If you missed him (and I hope you didn’t), he was positioned at the front part of the Snoqualmie Casino (@SnoCasino) “Luxe Lounge”, which was a great addition to this year’s SWFE. So without further ado, here are some of my highlights (believe me, there were a lot, these are just the ones I happened to capture photos of) of the 2013 Seattle Wine & Food Experience.

I’ll start here, because well, it’s pretty much where Ally (@allydrinksbeer) and I started with the event. We were on a food mission like no other. With so many restaurants there serving up unique dishes, why wouldn’t you beeline toward every food table you saw? One of my favorites of the day included the Certified Angus & red wine beef Bourgignon with garlic mashed potatoes, served up by Chateau Ste. Michelle Winery (@SteMichelle). This…was…a-mazing. I was eating it off to the side of the table and actually walked back over and asked if they could pretend they hadn’t already seen me because I REALLY wanted a second dish of it. They played along and my taste buds thanked them immensely. Wow. Another great food dish came from the WA Potato Commission table, which was paired up with Kaspars Special Events & Catering for their dish. They served a tasty chili over some potatoes (I’m seeing a theme here, I think I was really enjoying potatoes that day).

While there were several stand-out wines at the event this year, there’s one winery that I want to focus this section on. A winery I have tried previously but haven’t tasted through in over a year and a half is Sonoris Wines (@SonorisWines). Winemaker Hillary Sjolund worked with a few other wineries (most recently as the head winemaker at DiStefano Winery in Woodinville) before branching out on her own in early 2011. One of the unique things about Sonoris is that Hillary’s family members are featured on the wine labels of each of her wines. These are dedications to those who have inspired and motivated her throughout her career. I’ll tell you what, this gal has got some sweet connections, because her fruit sourcing is incredible. Sauvignon Blanc from Gamache Vineyard, a Vionier/Roussane blend from Lawrence Vineyard, and a Merlot/Cab Franc blend that includes fruit from Champoux Vineyard in Horse Heaven Hills and two vineyards from Red Mountain? Sonoris is charging right into the Washington Wine scene with wines that are unique and delicious. While I enjoyed the entire line-up that I tasted at SWFE, I especially enjoyed her whites. The 2011 Pure Grace (100% Sauvignon Blanc) and the 2011 Verna Mae (78% Viognier, 22% Roussane), were clean, crisp, and bright, and made me long for summer days. Sonoris wines can now be found in several wine stores in Western WA, including West Seattle’s bin41 (@bin41wine) and Wine World & Spirits (@WineWorldSEA), located off I-5 at 45th. With such low production, make sure to get your hands on these wines sooner rather than later.

I think I found my new go-to summer beer! The Magic Hat BrewingCompany (@MagicHat) #9 Not Quite Pale Ale is new to the Seattle market, and was poured by Pyramid Brewing at SWFE. This is the definition of a summer beer. It’s dry, crisp and refreshing and belongs in my hand while I’m in a boat (someone get me a boat). According to the website’s “Sipcode Locater”, it’s carried at the market just down the street from my house. Say what? Excuse me while I get some. Now.

Best Pairing That Made Me Go “Whoa"

I happened across the Treveri Cellars (@TreveriCellars) table early in the day, a favorite at any event I’m at. This time I tried the Brut Rose, since pink bubbles are quite possibly one of the best things on earth. Around the corner was the Top Pot Donuts (@toppot) table, where I snagged a cake donut with a strawberry frosting and white sprinkles. Not thinking anything of it, I took a bite of my donut and followed it with a sip of my Brut Rose. I pretty much stopped dead in my tracks because the combination was the last thing I expected while chomping on a donut and sippin’ the bubbly. Who knew that sparkling rose and donuts could be so amazing together?

One thing I really enjoyed this year (and maybe I’ve just never found it before if it’s been there before) was the Seattle Magazine (@SeattleMag) All Things Sweet Chocolate Shop Photobooth, provided by 321Foto. Ally and I hit it fairly early on when we found it the first time, and had some pretty fantastic impromptu shots. Later on in the event we ventured in again, this time with a plan of action, and the photos turned out just as great as the first visit. Photobooths are FUN, and such a great addition to any event! 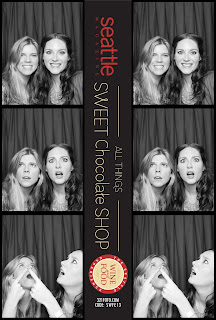 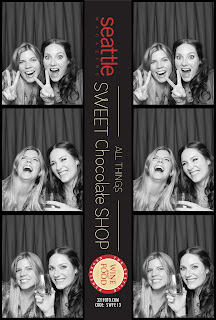 As a whole, the 2013 Seattle Wine & Food Experience was such a blast. The crowds stayed manageable and spread throughout the event space, and the lines weren’t too horribly bad at the tables. I loved the new additions this year and the different layout. Thank you to Peha Promotions and all the crew at the Seattle Wine & Food Experience for a great Sunday afternoon!
Posted by Taryn Olson at 9:18 PM