Have you procrastinated in obtaining your Wine Rocks 2012 tickets? Do you like free stuff? Well, then I have the contest for you. Sips & the City is giving away a pair of tickets to this year's Wine Rocks event, which (as I previously wrote about) is happening Wednesday July 11th, 2012.

Want a shot at the tickets? Here's what you have to do:

1. Head on over to the Twittersphere and follow @WineRocksSEA. There are great updates posted about the event.
2. Stop by the Wine Rocks Seattle facebook page and give them a "like". You'll also find more information about the event here.
3. Leave a comment on this post. I had fun with this last year by having people pair their favorite type of wine and music. Do it again! Think of it like a food & wine pairing but with music & wine. Get creative! Please make sure to leave your full name so I can find you if you win.

I'll randomly pick from all comments on Friday June 29th, 2012 at noon. Don't miss out on a chance to win tickets to what will surely be a fantastic event!
Posted by Taryn Olson at 5:43 PM 13 comments: 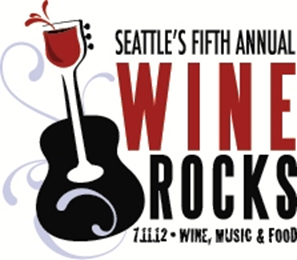 Back for the 5th year in a row, Wine Rocks is set to once again showcase the "rockin'" side of wine, this year at Elliott Hall at Pier 66 on the Seattle waterfront. This year's event will take place on Wednesday July 11th, from 6 to 10pm. With the food trucks returning (those were a great feature at least year's event) and over 35 wineries, breweries and distilleries on hand, it's sure to be a great time (as always). One of the best parts of the event isn't just that there's music, but that the performances are by some of Washington's winemakers themselves! The line-up for this year includes:

So how did Wine Rocks come to be? Founder Jen Doak states, “I created Wine Rocks in 2008 as an open house event for Gibson Guitars to bring publicity to their showroom. I suggested that they bring in a few local winery owners who also love strumming their guitars. The concept was a huge hit and Wine Rocks has grown every year since.” And boy has it ever. I've had the privilege of attending the past two year's events and each year it grew and changed venues to larger spaces. I can't wait to be down on the waterfront on a (hopefully) beautiful Seattle summer evening.

And some distilleries: BroVo Spirits and Project V Distillery and Sausage Company

And you’ve got the recipe for another great Peha Promotions event!

This year’s Wine Rocks event benefits The Giving Grapes Foundation, a 501c3 organization that assists local charities who provide financial assistance to service industry professionals who have to take time off work due to injury or illness.

BUT WAIT, THERE’S MORE! Sips & the City will be giving away a pair of tickets to this awesome event! Be on the lookout for the post detailing the giveaway (coming soon)!

What are you waiting for? Get your tickets here and I’ll see you on the Pier for Wine Rocks 2012!
Posted by Taryn Olson at 9:00 PM No comments: