From the Vine to your Glass: The AVAs of Washington 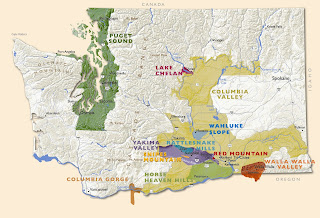 "AVA". It’s a term you’ve no doubt heard, but might not know much more about other than it means “wine region”. Well, in this edition of “From the Vine to Your Glass” we’re going to take a look at what AVAs are, and briefly explore the AVAs that make up Washington state.

AVA is short for “American Viticultural Area” and is a grape growing region distinguished from others by geographic features. The boundaries for these areas are requested by wineries, and actually set by the Alcohol and Tobacco Tax and Trade Bureau (or TTB for short). To name an AVA on a wine label, at least 85% of the grapes used to make the wine must be from that specific area. Here in Washington, we have some very well known AVAs, and others that you may have not have ever heard of. Washington has 12 AVAs at this time, but that is expected to change in the near future. So what and where are they? Let’s take a look see shall we?

This AVA was established in 2004. It actually encompasses not only areas in Washington, but also Oregon as well. It’s approximately 300 square miles and contains more than 20 wineries. It’s a long area that stretches clear from western into eastern Washington, which means that the climates can be significantly different in the drier eastern and cooler western areas. This is an AVA I have yet to visit for tasting, though I have had several wines from the area.

Established in 1984, the Columbia Valley AVA is the largest in Washington. It covers over 11,000,000 acres and contains 99% of all wine grapes grown in the state. The most common varietals that come out of this area include Riesling, Merlot, Chardonnay and Cabernet Sauvignon. I’ve visited wineries in this AVA on numerous occasions and if you were to ask an outsider about Washington AVAs, this would probably be the most common response of those that people remember. Interesting to note also is that this large area has several other AVAs within is expansive boundaries.

Horse Heaven Hills was established in 2005. It’s located in the southeast portion of the state and is about 570,000 acres. Well known for Merlot, Riesling, Cabernet Sauvignon, Chardonnay, and Syrah, the area puts out about 25% of Washington’s total grape production. While I have enjoyed many wines from wineries in this AVA, I haven’t actually ventured within it’s borders for winery visits as of yet.

This area officially received recognition as an AVA of its own (it was previously part of the Columbia Valley AVA) in 2009. It includes 24,040 acres, and contains both the southern and northern shores of beautiful Lake Chelan. The most common grapes coming out of this area include Malbec, Pinot Gris, Pinot Noir, Syrah, Merlot, Riesling, Gewurztraminer, and Chardonnay. The area had long been known for its apple orchards, but many orchards were removed once it was discovered that grapes grow well here, as there was more profit to be had in this new crop. The Lake Chelan AVA was the 11th recognized AVA in WA, and I was lucky enough to be in town when they threw a big party to celebrate it that summer. This is an area that I try to visit on an annual basis and I’ve been impressed with the growth of the wineries in this area.

This area is the baby of the Washington AVA family, having been established just this year (2012). While there are currently only 40 acres of grapes planted in the area, the total size of it is over 13,000 acres. The first grapes planted here (back in 2002) were Syrah, Pinot Gris and Riesling. It’s a higher elevation area and has a much cooler climate than surrounding AVAs. There are just two wineries operating within the borders of this AVA, Naches Heights Vineyards and Wilridge Winery. I’ve actually tried wines from both of these, but haven’t yet visited their facilities in the AVA.

I was surprised to learn of the Puget Sound AVA, since, as we all know, the weather can be so unpredictable in this cool wet area. This AVA was established in 1995 and contains 69 acres planted. While there are many wineries headquartered within this AVA (of which I have been to many), most of these source their grapes from east of the mountains and do not actually produce Puget Sound AVA wines. The area is suited for cooler climate varietals and I can’t say that I’ve yet tried any wines made from grapes grown in this area. It’s definitely going on my to-do list!

This AVA, located just south of Yakima, was established in 2006. Its area is 68,500 acres, but it has just 1,566 acres of planted grapes. Common varietals coming out of this area include Merlot, Syrah, Cabernet Sauvignon, Riesling, Syrah, and Chardonnay. I haven’t spent any time tasting at the wineries in this area, nor have I tried much from wineries here, but there are 17 wineries within this area.

Red Mountain is another one of the popular kids when it comes to AVAs in this state. While not extremely large (just 4,040 acres total with 1,199 acres of vineyard), it contains several well known labels and vineyards that have been around for years. It was established in 2001 and puts out Syrah, Merlot, Malbec, Cabernet Sauvignon, Cabernet Franc, Sangiovese, and Petit Verdot from some very highly esteemed vineyards. I’ve tasted at wineries in this area several times, and have always been impressed at the quality of the wine.

Another newer AVA established in 2009, Snipes Mountain has an area of 4,145 acres near the Yakima River. The area is well known for its unique soil and elevation and is actually the second smallest AVA in Washington. While small in area, the grapes that come out of here are used by many well-known Washington wineries. I haven’t been tasting at any wineries within this area, I have had wine from several wineries that source grapes from here.

This area lies completely within the Columbia Valley AVA (as does several others) and was established in 2006. It’s an 81,000 acre region that has 5,652 acres of vineyard planted. This area is dry and warm (one of the driest and warmest in the state in fact) and the most popular grapes from here are Cabernet Sauvignon, Syrah, Merlot, Chenin Blanc, Riesling, and Chardonnay. I’ve had wines from several wineries that source grapes from this area.

Most people think of Washington Wine history, and Walla Walla springs to mind. This AVA has been around awhile, established back in 1984. It has more than 1,600 acres of grapes and over 100 wineries located within its borders. Grapes from this area are varied, with a myriad of varietals being well known in this area. I had the privilege of visiting this AVA back in 2011 and enjoyed it immensely. Even with tasting at so many different places in two days, I hardly put a dent in the list of quality wineries in the area. A trip back is needed soon!

Last, but certainly not least (it’s just last because it has the honor of starting with a “Y”), the Yakima Valley was Washington’s very first recognized AVA. It was established in 1983 and contains over 16,000 vineyard acres. The most common grape in this area is Chardonnay, followed by Merlot and Cabernet Sauvignon. The area is home to many well-known wineries and is a fun spot to visit for wine tasting.

So, there we have it! A brief (well, sort of brief) look at the 12 AVAs that make up the beautiful Washington wine country. Each area is unique in its own way and has characteristics that set it apart from neighboring AVAs. Now, when you look at a bottle of Washington wine, you’ll know a little more about the AVA listed on the label. Drop some knowledge on your friends, you can thank me later.

Join me for my next adventure in the “From the Vine to Your Glass” series. I’m not entirely sure yet what that’s going to be, but you better believe it will be good (and it will have something to do with making wine!).

*Note: You might wonder why that map up top only has 11 AVAs on it. Well, for the life of me, I couldn't find a map that had been updated to include the newest AVA, Naches Neights (just added last month). So, just pretend it's on there too... also, big thanks to the Washington Wine Commission for a lot of the great AVA facts I included here. Their website is a wealth of knowledge!
Posted by Taryn Olson at 9:27 PM